Get fresh music recommendations delivered to your inbox every Friday.
We've updated our Terms of Use. You can review the changes here.

Helian (from the split with Jute Gyte)

from Helian by Spectral Lore 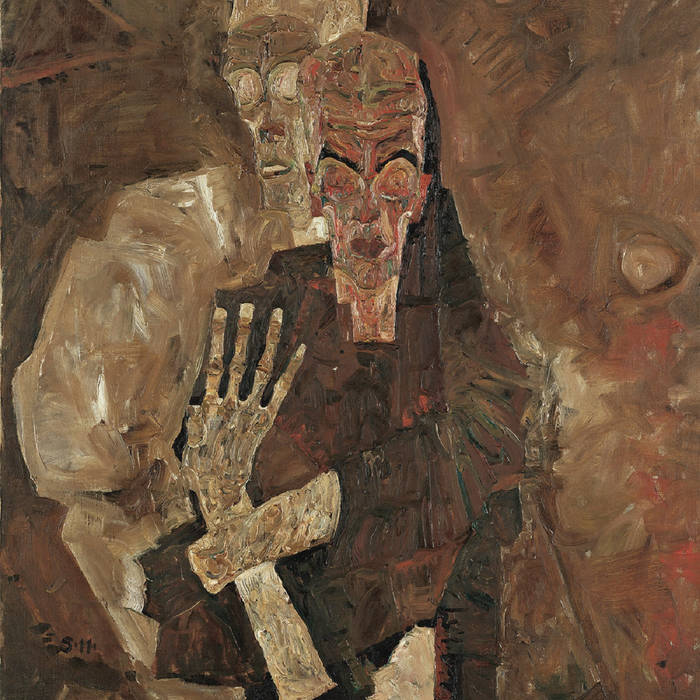 "The sole projects of Ayloss and Adam Kalmbach respectively, both acts are recognized as true innovators, always interested in exploring new musical territories, completely unconcerned about the trends that currently dominate metal and its sub-genres. Despite the obvious differences in terms of style and approach, SPECTRAL LORE and JUTE GYE have found a common ground in “Helian”, a poem written in 1913 by the great Austrian expressionist poet Georg Trakl. For Trackl himself “Helian” was “the most precious and painful” poem he had ever written; for Ayloss and Adam Kalmbach is an inspirational source to further investigate themes that have always informed their poetic visions, focused – like Trackl's poem – on a lush and vivid Nature soon turning into an Autumnal landscape, close to die. SPECTRAL LORE and JUTE GYTE's progressive, experimental metal assumes here the tone of a painful observation on death and the decadence of man, victim of the incomprehensibility of existence, the impenetrable mystery of God, and the misery and desolation it all brings.
The whole album finds a synthesis in its cover art, the famous “Tod und Mann” (Death and Man) painting by Egon Schiele, one of Gustav Klimt's pupils and among the most important exponents of the Viennese Expressionism".

In the spirit’s solitary hours
It is lovely to walk in the sun
Along the yellow walls of summer.
Quietly whisper the steps in the grass; yet always sleeps
The son of Pan in the grey marble.

At eventide on the terrace we got drunk on brown wine
The red peach glows under the foliage.
Tender sonata, joyous laughter.

Lovely is this silence of the night.
On the dark plains
We gather with shepherds and the white stars.

When autumn rises
The grove is a sight of sober clarity.
Along the red walls we loiter at ease
And the round eyes follow the flight of birds.
In the evening pale water gathers in the dregs of burial urns.

Heaven celebrates, sitting in bare branches.
In hallowed hands the yeoman carries bread and wine
And fruit ripens in the peace of a sunny chamber.

Oh how stern is the face of the beloved who have taken their passage.
Yet the soul is comforted in righteous meditation.

Overwhelming is the desolated garden‘s secrecy,
As the young novice has wreathed his brow with brown leaves,
His breath inhales icy gold.

The hands touch the antiquity of blueish water
Or in a cold night the sisters’ white cheeks.

In quiet and harmony we walk along a suite of hospitable rooms
Into solitude and the rustling of maple trees,
Where, perhaps, the thrush still sings.

Beautiful is man and emerging from the dark
He marvels as he moves his arms and legs,
And his eyes quietly roll in purple cavities.

At suppertime a stranger loses himself in November’s black destitution;
Under brittle branches he follows a wall covered under leprosy.
Once the holy brother went here,
Engrossed in the tender music of his madness.

Oh how lonely settles the evening-wind.
Dying away a man‘s head droops in the dark of the olive tree.

How shattering is the decline of a family.
This is the hour when the seer’s eyes are filled
With gold as he beholds the stars.

The evening’s descend has muffled the belfry‘s knell in silence;
Among black walls in the public place,
A dead soldier calls for a prayer.

Like a pale angel
The son enters his ancestor’s empty house.

The sisters have traveled far to the pale ancients.
At night, returned from their mournful pilgrimage,
He found them asleep under the columns of the hallway.

Oh hair stained with dung and worms
As his silver feet stepped on it
And on those who died in echoing rooms.

Oh you palms under midnight’s burning rain,
When the servants flogged those tender eyes with nettles,
The hollyhock’s early fruit
Beheld your empty grave in wonder.

Fading moons sail quietly
Over the sheets of the feverish lad,
Into the silence of winter.

At the bank of Kidron a great mind is lost in musing,
Under a tree, the tender cedar,
Stretched out under the father’s blue eyebrows,
Where a shepherd drives his flock to pastures at night.

Or there are screams which escape the sleep;
When an iron angel approaches man in the grove,
The holy man’s flesh melts over burning coals.

Purple wine climbs about the mud-cottage,
Sheaves of faded corn sing;
The buzz of bees; the crane’s flight.
In the evening the souls of the resurrected gather on rocky paths.

Lepers behold their image in dark water;
Or they lift the hemp of their dung soiled attire,
And weep to the soothing wind, as it drifts down from the rosy hill.

Slender maidens grope their way through the narrow lanes of night;
They hope for the gracious shepherd.
Tenderly, songs ring out from the huts on weekend.

Let the song pay homage to the boy,
To his madness to his white eyebrows and to his passage,
To the decaying corpse, who opened his blue eyes.
Oh how sad is this reunion.

The stairs of madness in black apartments –
The matriarch’s shadow emerged under the open door
When Helian’s soul beheld his image in a rosy mirror;
And from his brow bled snow and leprosy.

The walls extinguished the stars
And the white effigies of light.

From the carpet rise skeletons, escaping their graves,
Fallen crosses sit silent on the hill,
The night’s purple wind is sweet with frankincense.

Oh ye broken eyes over black gaping jaws,
When the grandson in the solitude
Of his tender madness muses over a darker ending,
The blue eyelids of the silent god sink upon him.

This page hosts most of the music I've released through Spectral Lore and other projects. Atmospheric black metal, ambient, dungeon synth and more. I'm antifascist so NSBM fans stay away.

A Compendium of Curiosities (dungeon synth)

Bandcamp Daily  your guide to the world of Bandcamp